﻿ ﻿ KINDERGARTENS INCLUDING 600 CLASSROOMS INAUGURATED IN İSTANBUL ﻿ ﻿

KINDERGARTENS INCLUDING 600 CLASSROOMS INAUGURATED IN İSTANBUL

Inauguration ceremony of 300 container kindergartens including 600 classrooms established as a part of "Increasing Access and Quality of Early Childhood Education" Project which was initiated in cooperation with the Ministry of National Education and the UNICEF was held in İstanbul.
﻿ 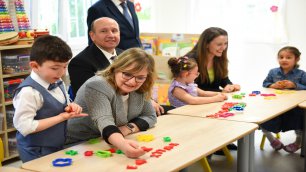 Deputy Minister of National Education Petek Aşkar, Deputy Minister of Labor and Social Security Lütfihak Alpkan, UNICEF Türkiye Representative Regina De Dominicis and Deputy Head of Delegation of the European Union to Türkiye Angel Gutierrez Hidalgo were present at the ceremony held at the Korozo Primary School.
Deputy Minister Aşkar noted that the project includes different components and one of those was to open container type moveable kindergartens.
"Due to the lack of vacant lots, it is important for us to install such structures at the school gardens as a part of our goal to disseminate preschool education and increase its quality," said Aşkar.
Stating that early childhood is an important era for forming a solid ground for lifelong learning and establishment of social, emotional, cognitive and psychical development, Aşkar stated that the Ministry has no tolerance for neglecting preschool education of a single child.
"We are aiming at increasing the schooling rate of the 3 year age group from 14 percent to 50 percent, schooling rate among the 4 year age group from 35 percent to 70 percent and finally schooling rate of the five year age group to 100 percent," Aşkar added.
"We have opened 8 thousand and 500 preschool classrooms"
Aşkar stressed that there has been a decrease in the schooling rate among the five year old age group last year due to Covid-19 pandemic but the Ministry achieved to improve this figure to 92 percent this year.
Aşkar reminded that the Ministry has set the goal to open 3 thousand new kindergartens and 1,000 of these schools will be opened in İstanbul
"We will also open 40 thousand preschool classrooms all over the country and we have already opened 8 thousand and 500 classrooms," Aşkar said.
"Such solutions are an example of social innovation"
Meanwhile, Deputy Minister of Labor and Social Security Lütfihak Alpkan stated that the early childhood education project is an important investment for the future of the country adding that, "Opening container type preschool classrooms especially in overcrowded districts is an important solution and such solutions are actually an example of social innovation."
30 thousand children will be enrolled in schools every year
As a part of the project, the Ministry will establish 300 containers with 600 classrooms in order to support schools which lack vacant lot for the construction of new buildings. This will allow 30 thousand children to enroll in schools every year.

MINISTER ÖZER IS IN PARIS FOR THE TRANSFORMING EDUCATION PRE SUMMIT

Minister Mahmut Özer held his first meeting with OECD General Secretary Mathias Cormann as a part of his program in Paris where he will [...]

OECD: DEVELOPMENTS IN THE EDUCATION SYSTEM OF TÜRKİYE IN THE LAST 20 YEARS MUST BE AN INSPIRATION FOR THE REGION

The Directorate General for Vocational and Technical Education affiliated to the Ministry of National Education has signed a protocol with [...]

Minister of National Education Mahmut Özer attended the opening of the "Agriculture From Education to Production" workshop organized in [...]

MONE © - All Rights Reserved. Services are provided within the framework of the rules set forth in the Privacy, Use and Copyright notice.